The performance is Friday, May 6, at the Miami Theater Center in Miami Shores, and the work was co-commissioned by Live Arts Miami and Duke University, as part of Haitian Heritage Month celebrations in May.

On April 3, 2000, in Haiti, a thunderclap erupted in a serene sky. The journalist, agronomist, and human rights activist Jean Leopold Dominique, the director of Radio Haiti Inter, had been shot dead as he prepared to broadcast the morning news in Port-au-Prince. Jean-Claude Louissaint, a station employee, was also killed in the attack.

Known for his famous editorials, Dominique often took on the political regime in power and addressed sensitive topics. It was his station, Radio Haiti-Inter, which first broadcast news, investigations, and political analysis in Haitian Creole, the language spoken by most Haitians.

Twenty-two years after the crime, the perpetrators remain at large as an investigation into the killings failed to identify them. It is within this context that McCalla’s piece takes form. The title is from a phrase that Dominique used to throw at the opposition to journalists or those who threatened them for reporting facts. He would tell them that the press is just the thermometer. Breaking it will not stop the fever but will only hide it. 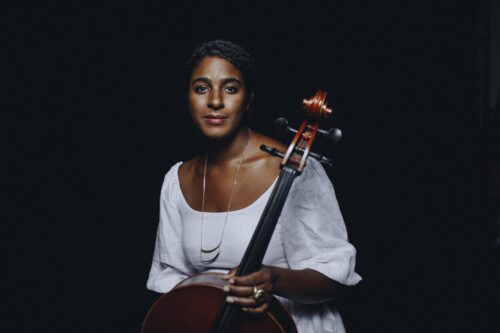 Taking its cues from the legacy of Radio Haiti-Inter, “Breaking the Thermometer” explores themes of exile and return, what it means to be Haitian, and the contribution of an independent press to the fight for Haitian cultural identity, freedom, and democracy.

McCalla first became acquainted with Radio Haiti-Inter at the age of 15, when she met Michèle Montas, Dominique’s widow and former co-director of the station. It was at that time that Leyla’s father, Jocelyn McCalla, the executive director of the National Coalition for Haitian Rights in New York City, was screening Jonathan Demme’s “The Agronomist,”  a film about Dominique.

Several years later, Duke University commissioned Leyla McCalla to create a multimedia theater performance based on the Radio Haiti-Inter archives it had acquired in 2015.

The piece originally premiered at Duke Performances in March 2020, just before the Covid-19 shutdown. It features archival recordings and interviews combined with her original compositions and arrangements, dance, and dynamic video projection design.

“I decided to turn the theatrical performance into an album, fleshing out the songs with my full band and so the album ‘Breaking the Thermometer’ serves as a sort of soundtrack to the theater piece,” explains the New Orleans-based multi-instrumentalist who plays cello, guitar and banjo. She sings in Haitian Creole, English and French, deeply influenced by traditional Creole, Cajun, and Haitian music, as well as by American jazz and folk.

In researching at the Radio Haiti-Inter Archive and trying to understand how the story could become an artistic expression, the Haitian American artist grappled with her ties to Haiti and her “Haitianness,” she says.

“A lot of my nostalgia for Haiti and my experiences visiting Haiti as a child emerged as threads that could connect an audience to Haiti through my experience.”

As McCalla reflects on the sacrifices made by Radio Haiti’s journalists in exposing truths about what was happening in the country and in the world, while putting her experiences in Haiti into a historical context, she finds that it has been a very healing and emotional journey.

The singer believes that the press, anywhere in the world, should be free to speak and investigate what’s going on in society without fear of retribution or persecution.  She expresses the sentiment in “Boukman’s Prayer,” a song that encourages her audience to “listen to the voice of liberty that sings in their hearts.”

She describes her music as part of a holistic expression and a quest for truths about life to better understand the world we live in.

“The listeners are invited to explore this history with me, both in a macroscopic way and in a very personal way,” she says.

“Breaking the Thermometer” weaves together music with traditional dances, audio and video recordings from the Radio Haiti archive and McCalla’s personal storytelling.  It was directed by theater director Kiyoko McCrae and features dancer Sheila Anozier with McCalla and her ensemble of musicians.

The commission was led by Duke Performances at Duke University.  The university had just acquired the Radio Haiti archives and sought to make its stories more accessible to a broader public through the commissioning of the work.  “Duke approached us about partnering in the commission, which we immediately signed onto, along with the Contemporary Arts Center in New Orleans,” explains Kathryn Garcia, the executive and artistic director of Live Arts Miami.

“We are thrilled to celebrate Haitian Heritage Month with this stunning new performance by Leyla McCalla,” Garcia says. “This project is an exciting extension of Leyla’s musical career – bringing life to this important story on a theatrical stage.”

McCalla gained fame as a cellist with the Grammy award-winning Carolina Chocolate Drops and is set to release her new album incorporating music from the project entitled “Breaking the Thermometer” in tandem with the May 6 performance in Miami.

With lyrics in both English and Haitian Creole, the album features sophisticated melodies and Afro-Caribbean rhythms.

The songstress concludes by saying that her ancestral homeland serves as an endless source of inspiration and pride for her. “As a country that has been so stigmatized and misconceived, I find myself drawn to stories and songs that dissolve those illusions and create more nuanced pictures of the country. I also find that there is a huge educational component that is so necessary for our spiritual growth as a society.”