Posted By Jonel Juste on ArtburstMiami.com

Fifty years later, the world still remembers the famous “Fight of the Century” between Muhammad Ali and Joe Frazier. But what some may not know is that Ali trained in Miami Beach for that bout. HistoryMiami Museum is shining a light on the relationship between South Florida and “The Greatest of All Time,” with an exhibit of rare images that’s on display through Aug. 29.

“Muhammad Ali had a deep connection with the city of Miami, which plays an important role in his life and career,” said Michael Knoll, the museum’s chief curator and the director of curatorial affairs. “We hope that visitors are going to connect with the story of Muhammad Ali in Miami, and hopefully be inspired to learn more about his connection to the city.”

The exhibit, “Muhammad Ali in Miami: Training for the ‘Fight of the Century,’” features 20 silver gelatin photographs from the “ALI/MIA” portfolio, obtained with the support of the Knight Foundation. They were selected and handmade by Miami Beach-based photographer Andrew Kaufman. Seventeen of the images document Ali’s time training for the 1971 match at the 5th St. Gym in Miami Beach.

“These photos captured a historic moment for Ali. He was just returning to boxing after his conviction for refusing to register for the draft in 1967 had been overturned,” the museum’s executive director, Jorge Zamanillo, said in a statement. “These photos show him preparing to return to the biggest stage in sports at that time, and we hope everyone will visit the museum to view an incredible and rarely seen collection of images.” 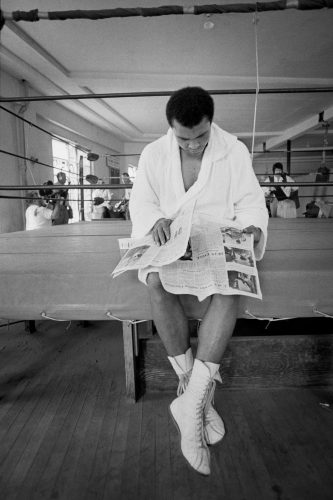 The three other images — which capture Ali’s final fight, dubbed “Drama in Bahama,” against Trevor Berbick — were taken in 1981 by Pulitzer Prize-winning photographers Larry Spitzer and Jebb Harris of Louisville’s Courier-Journal.

The images are displayed within a new photography gallery dedicated to exhibiting selections from the museum’s extensive collection, Knoll said.

“We created a new gallery to specifically highlight our photography collection. We did that to share more of our collection and tell more of Miami’s stories,” he said.

Ali’s personal physician and cornerman, Ferdie Pacheco, has often been quoted as saying: “Cassius Clay was born in Louisville, but Muhammad Ali was made in Miami.”

He arrived in South Florida in 1960 — and both Miami and Miami Beach would bear witness to many moments and milestones: He was known to enjoy the music scene at the Hampton House, near Brownsville, a historic Black neighborhood west of Liberty City. He trained at 5th St. for his 1964 fight vs. Sonny Liston at the Miami Beach Convention Center and became heavyweight champion here. He later announced his conversion to Islam here and changed his name from Cassius Clay to Cassius X then to Muhammad Ali.

But, of course, most of the exhibit focuses on the “Fight of the Century,” and his preparation in Miami Beach. 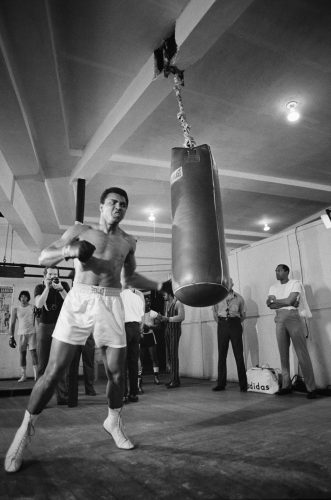 About four years prior, Ali had been stripped of his title for refusing to sign up for the draft for the Vietnam War. He stated that he would not fight for a country that was still oppressing its own people, according to HistoryMiami Museum. But Ali headed back to the ring with great confidence.

On March 8, 1971, the world watched, with more than 300 million viewers reportedly tuning in to see the two undefeated heavyweight champions facing off. Ali lost that match. Still, he went on to fight Frazier twice more and beat him twice.

The exhibit at HistoryMiami, which is an affiliate of the Smithsonian Institution, is free and open to the public. Its collection boasts more than 2 million images documenting South Florida history from the late 1800s to the present, according to the museum. These include photojournalism, aerial photography, street scenes, architectural photography, and images of everyday life.

PS: All photos shown here are part of the “Muhammad Ali in Miami: Training for the ‘Fight of the Century’” exhibit at HistoryMiami Museum, through Aug. 29. (Courtesy of Larry Spitzer/Louisville Courier-Journal)