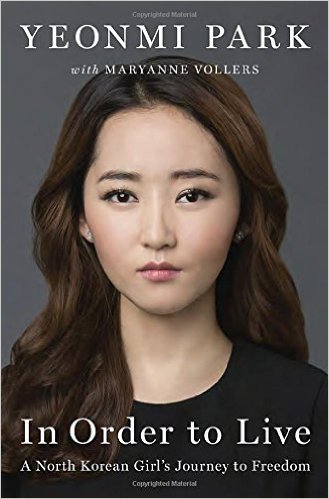 Human rights activist Yeonmi Park fled North Korea with her mother in 2007 at age 13 and eventually made it to South Korea two years later after a harrowing ordeal. In her book “In Order to Live”, she exposed the cruelty of the North Korean oppressive regime and the viciousness of the human trafficking in China. As a Haitian who can relate to her story, after reading the book, we wrote an open letter to the author.

The first time I read your story, it was a month ago while I was flipping through the Reader’s Digest. After reading the article, I quickly tapped the Amazon app to order your book “In order to live”. I was just curious, I wanted to know more about North Korea and about you. I wanted to take a trip to the Hermit Kingdom, the most secluded country in the world. And I was not disappointed. I got the book two days after ordering it, and I was hooked since then. You took me into your country, into your life, your intimacy, and it’s really not fair I know so much about you and you know nothing about me. Thanks to the magic of reading, I could breathe through your nostrils, and my heart was beating into yours. I could run and pant along with you. I could sense your fear while you were crossing the Yalu River into China. I was also shivering when you were following the stars through the frigid Gobi desert to freedom, and I was very happy and relieved when you made it to South Korea and be finally free!

“In order to live” is a genuine story of survival and freedom. It inspires and gives hope. As a Haitian who comes from the so-called “poorest country in the West Hemisphere”, I can definitely relate. Some passages of the book could have happened in Haiti. As I was reading and “visiting” North Korea, many scenes looked familiar, like the one about people waking up in the middle of the night to celebrate the return of electrical power after days of outage. In Haiti, there was always a clamor in the middle of the night (“Woy!Yo bay li”/the light is here) to wake up everyone in order to celebrate the event. Usually my mother would jump on her feet and on the occasion to iron some clothes like my school uniform etc. Others would watch TV and do everything they possibly can with that electric power before it vanishes for days. Electricity was and is still rare in Haiti.

“In order to live” taught me many lessons. The first one is about freedom that we should never take for granted. Freedom is not free, many people fought and died so I could have it today. In fact, the fight for freedom is a relentless one, even in the West which champions freedom and human rights. Today, when I hear a certain frontrunner for the upcoming US presidential elections say “In the good old days, they could not do this or that”, I cringe a little because in the good old days, they also used to hang Black people on trees. We must keep on fighting to keep the “good old days” from coming back. The reality is that some retrogressive people actually hate freedom and human rights; they even dream of totalitarian power, Kim Jung Un style that is. Some others would like the freedom and the rights uniquely for themselves, their clan, their race or their songbun. It’s scary.

In fact, Yeonmi, until I read your book, I never knew how precious and fragile freedom was. I always thought it was “natural” to be free and to have rights. I was born in the first independent black country in the modern world before living in the United States, the leader of the free world. My ancestors successfully fought their way to freedom; they defeated colonial France, and since then Haitians are in love with freedom. They managed to spread their revolutionary ideas and inspired revolutions in many parts of the world. They sent soldiers out to Latin America, to the US and even to Greece to fight for freedom. That was more than 200 years ago. Every now and then, some apprentice dictators nostalgic of a dark age would try to steal our freedom, but we quickly get our freedom back. So I’ve always considered myself as a free man. When I came here to the US, I noticed people had even more freedom. Like you did in Seoul, I noticed Americans even had the freedom to decide who they wanted to be, they dream of a better future, and that’s something that we don’t have in Haiti. Like in North Korea, working hard doesn’t guarantee a better future, it depends on your social class, your name or your connections. But freedom is definitely worth fighting for. It’s a crime when despotic leaders steal people’s liberty and enslave them for their personal ambitions and failed ideologies.

Before reading your book, Yeonmi, I had no idea what human trafficking really was. I didn’t know that an individual could literally sell another one like a horse or a chair. I read about human trafficking in history books and, at that time, it was called slavery. That was barbaric and, which was even worse, legal. But it was more than 400 years ago. Today, selling people as goods is inconceivable to someone raised in the western world. In America, human trafficking often refers to some runaway kids, mostly girls, who flee their homes to fall prey to some ill-intentioned adults who promised to help them or even pretended to love them, then force them into prostitution. That’s all I knew about the problem that was obviously worse than I thought and beyond my imagination. I was shocked to know what was going between North Korea and China, and it was a greater shock to know that the two countries tacitly agreed on this inhumane traffic when it came to women. Just reading about the trafficked women’s suffering is unbearable. One can wonder how human beings can be treated like this in the 21th century. These practices belong to a bygone and shameful era. It would take a time machine to travel there, which takes me to my third point.

In your book, you said that “Hanawon is like a boot camp for time travelers from the Korea of the 1950s and 60s who grew up in a world without ATMs, shopping malls, credit cards or the Internet”. This one made me laugh because that is my exact idea of time travel. No need for a time machine, just board the airplane! When I left Haiti for the first time, the aircraft that took me to Canada took me literally from 1980 to 2001. I jumped over 21 years in 4 hours! We generally think that all the inhabitants of this planet are living in the same time within the same time consciousness, which is not true. There is a time discrepancy that is obvious, and it’s not only because of technology but also the different mentalities. Mentally and technologically, many people on this planet are living in different times. That’s a fact. Some people are still living in the Neolithic era, some others in the Middle Age, some in the 20s, the 60s etc. Some of us are living in 2016 while others are already in 2020. Yes, some people are already living in what I’d probably call the future. My present may be someone’s future or past. Relativity.

Personally, I guess I had some idea of the modern world before living in, maybe because I was raised in a big city, had some education, and was curious about the world. I discovered the modern world through books, TV, the Internet, and later through my travels. But still, I had some catching up to do when I came the US 5 years ago. Like you, I discovered shopping malls, credit cards and the credit system in general, not that we didn’t have some of these stuffs in Haiti but they were limited to a group of people who were lucky enough to have them. When you described your journey to Pyongyang, I had the same feelings when I discovered for the first time Port-au-Prince, the Haiti’s capital city 28 years ago. At that time there was some electricity and the city was not yet destroyed by the 2010 earthquake. When I came to the US, I had 30 years to catch up, and can consider myself lucky or blessed. I know many people who had to catch up 200 years just because they was raised in Haiti’s countryside that looks like North Korea’s Hyesan. They are completely in the dark both literally and figuratively, and I could be one of them. I often hear stories of people who came directly from Haiti’s countryside and miraculously made it to the US. To them, it’s a total shock and a wild trip from a remote past to a postmodern future. Scary. I mean, when you never had electricity and never saw a light-bulb in your life, you may imagine the best way to turn the light off is to blow it out like a candle. I heard stories of people who panicked in front of an automatic sliding door, thinking the door was demon-possessed. Some Haitians thought it was magic and started calling on their ancestral spirits! You said you’ve washed your hands in a toilet bowl; on my side, I believed it was sorcery when my toilet flushed itself after I was done. It was in 2009 when I first visited the US. The technological gap is huge between the first and the third world; when you jump over that gap, you may be in for quite some surprises.

Now there’s a difference when a third world country is disadvantaged because of poverty or a lack of infrastructure and when this disadvantage is the fact of a dictatorship that purposely keeps people in the dark for ideological reasons. I’m sure that most tyrants who bar their people from using today’s technology use it themselves. I’m sure Kim Jung-Un has the latest Samsung Galaxy S7 and the VR headset that comes with it. Although Samsung is a South Korean company, I’m sure the Dear Leader found a way to pre-order the phone, probably using a dummy. And maybe he got it before anybody else. That’s a huge hypocrisy. The problem with dictators is that they refuse to other people what they indulge themselves with. It’s like a big kid who wants all the toys for himself. Toys like freedom, rights, fulfilment, and even the right to happiness. That’s so childish. Dictatorship is childish. It takes a grown man to play the democratic game. Leaving 25 million people in the dark, literally and figuratively, for personal ambitions, lying to them about what is really happening in the world, is outright criminal.

Yeonmi, I’m really glad you made it out of North Korea and lived to tell your story which is unique. Humanity would definitely lose something if you died in the icy desert of Gobi. We wouldn’t hear that tiny but powerful voice of hope and inspiration. You were afraid that if you ever died in the desert, nobody would hear your voice or know your name, but now the world knows your name and is listening to your voice. You said that all of us have our dessert to cross until we find our purpose. I’m glad you found yours, which is to speak for millions of voiceless people, to expose human trafficking, and that’s a wonderful happy ending.